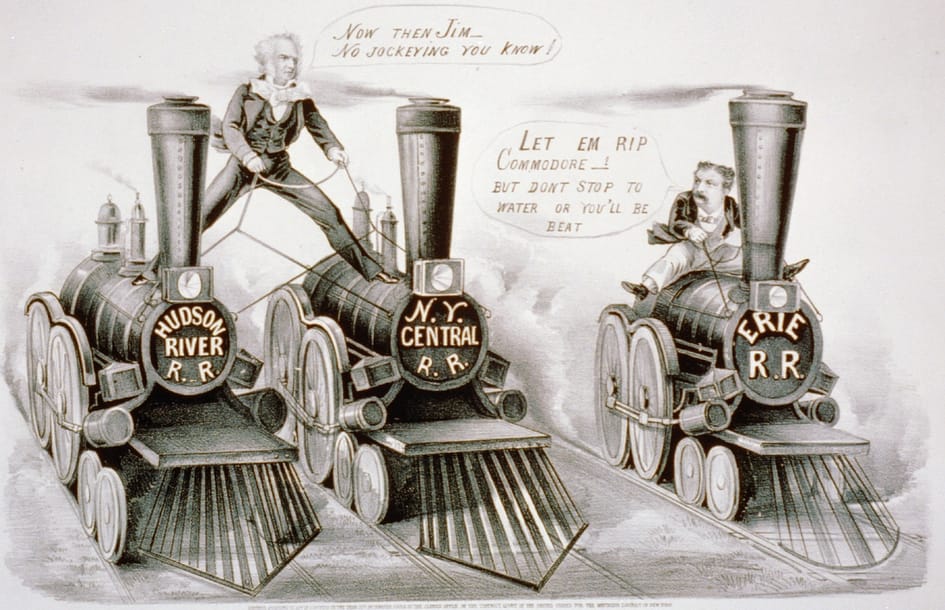 Couldn’t wait to get my hands on this, as it’s right up my reading alley. American history, American business, the Vanderbilts, J.P. Morgan, Theodore Roosevelt, and muckraking – it’s all in there!

Iron Empires: Robber Barons, Railroads, and the Making of Modern America by Michael Hiltzik
My rating: 4 of 5 stars

Michael Hiltzik delivers a well-studied, in-depth view of the forming of the American railroads from the Gilded Age through the Great War. Perhaps even too detailed for those of us without intricate knowledge of stocks, bonds, and how Wall Street operates.

The initial profiteers, visionaries such as Cornelius Vanderbilt, Daniel Drew, James Fisk, and Jay Gould, used the railroad ventures as vehicles for amassing huge wealth. John J. Hill, and later, John Pierpont Morgan and Edward Henry Harriman, then entered the scene to use more responsible decision-making to improve the systems in place, yet still with the main objective of making exorbitant profits.

As the magnates grew larger and richer, the general public tired of seeing their own expenses increasing, job security diminish, and their pocketbooks dwindle, causing a dangerous labor movement and provoking journalists to began a “muckraking” campaign against the ongoing injustices practiced by big business.

The wars between the railroads were the direct cause of several, depression-like waves of financial panic – one in 1873, another in 1893, forcing the government to regulate not only the railroad industry, but steel, oil, and other monopolies as well (i.e. Sherman Antitrust Act).

Finally, at the dawn of the 20th century, President Theodore Roosevelt took charge and ended, once and for all, the shenanigans of those big-time players.

In hindsight, the robber barons of the late 19th century served a beneficial purpose, as they moved us into the progress of the 20th century.