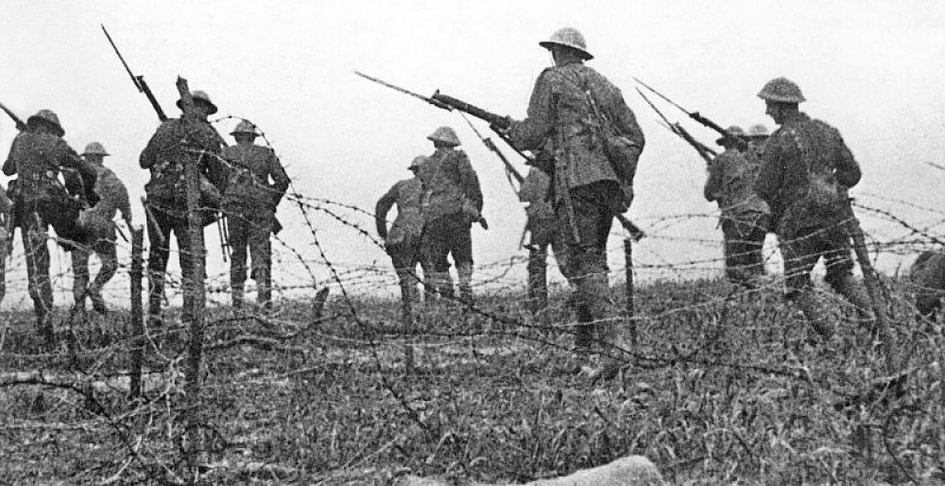 The First World War was an absolute transformation of warfare from the Victorian to the modern era of the 20th century. The “Big Push” was a major Allied offensive into the German lines at the northern end of the western front along the Somme river, involving Kitchener’s Army (as in Lord Kitchner of the African and Asian campaigns of the late 1800s) against the Kaiser’s Germans (spiked helmets and all).

The strongly entrenched Germans were armed with leading edge weaponry manufactured by the Krupp family (the maxim machine gun) with it’s factories along the Ruhr River. The effects of the machine gun on the battlefield earned it the nickname “widowmaker” and proved to be a great menace to the proud British Army. The battle of the Somme was one of the costliest battles in British history.

Somme by Lyn Macdonald
My rating: 3 of 5 stars

In the summer of the second year of the Great War, British and French troops mounted an offensive against the Hun along the Somme River in northern France. The Germans had been entrenched for the previous two years and were solidly fortified. Charge after charge by mostly British troops (many of the French were redirected to fighting at Verdun) amounted to no more than a few hundred yards of real estate after the first two months. With the remnants of practically an entire generation of Great Britain hanging in the balance, a last ditch effort was mounted to make a decisive break-through in the late summer, with a “secret weapon” up their sleeve – the tank (the name “tank” was used so to start the rumor that the metal monsters were merely water tanks). Though only four of the original forty to fifty sent into the field made it to the front lines, the result was smashing. The sight of these noisy contraptions scared the “dickens” out of the Germans who fled to their rear. The British advanced two miles through the German lines within a few hours, making more headway than the previous three months and with a small fraction of the usual number of casualties.

Being a history buff, I thoroughly enjoyed reading this and was impressed at the skill of a woman writer in her detailing of the battle and events surrounding the offensive, including her relating of some of the male humor shared between soldiers. My knowledge of the “Great War” (which it was known until the Second World War broke out) is relatively light. This book has inspired me to do more research on the topic.